Staff Evaluation Of Me

Last spring I read Work Rules by Laszlo Bock, who's the Senior VP of People Operations (Human Resources) at Google. It was an interesting read in many ways, but one particular take away for me was the need to ask more directly for feedback. Like everyone I, of course, get informal day-to-day feedback from the folks I work with, and more formal feedback from my supervising administrator. But that's not the same as specifically asking for feedback, so I decided to ask my colleagues to complete a google form at the beginning of this school year. (I've also posted a link to a Google Form for student feedback for me several places around the building but, so far, I only have one response. If I get some more I'll share that as well.)

When I sat down to create the form I quickly got into the weeds. I wanted specific feedback, yet when I tried writing specific questions I ran into two problems. I felt like the questions were both too "leading" and too "limiting", and to get at everything I wanted feedback on required so many questions that it made the survey way too long. So I eventually decided on a few open-ended questions that I hoped would get me some decent feedback but make the survey short enough that people would complete it.

Here's a screenshot of the survey. 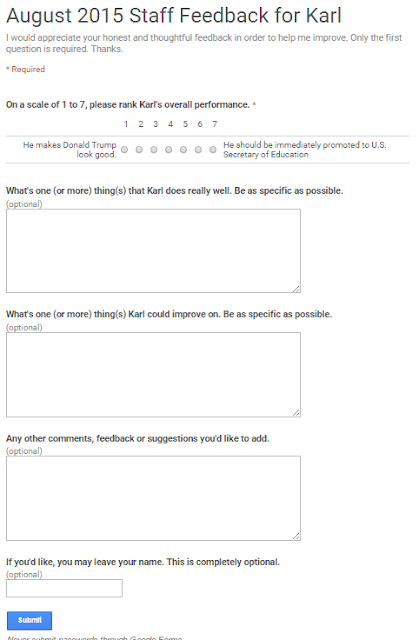 Based on the suggestions in the book and some other things I've read, I decided to go with a simple ranking of 1 to 7, one question on what I do well, one on what I can improve on, and then the usual "anything else they want to add." I was hoping that this would give them enough to give me some valuable feedback without getting too specific or too long. The downside, of course, is that's it's not very specific. They could take it anonymously or give me their name if they wanted to.

Here are the results. This is an exact copy of the actual results, except for the optional name column. In that column I replaced anyone's name with an asterisk for their confidentiality. So, as you look at that column, a blank space indicates that it was an anonymous response and an asterisk that they gave their name. (I received 62 responses. We have about 115 certified staff and about 40 classified staff.)
I think there are a couple of caveats (at least) to keep in mind when looking at these results. First, I think they will tend to skew positive, both because people who were ready to say nice things were more likely to take the time to complete the survey, and just because educators are generally nice. Second, I think you can't read too much into the results (positive or negative) because the questions were so open-ended. I think that's a trade-off I had to make, but still something to keep in mind.

So, I have my own thoughts on what the results mean, but I think I'll keep them to myself for now, because I'd love to hear what other people see in the results without influencing your thinking. So please leave your thoughts in the comments - it would probably be most helpful if you would focus particularly on the "things I could do better column", but all of it is fair game.
Posted by Karl Fisch at 7:46 AM