Linux on Netbooks and Whiskers on Kittens

This is going to be a long post, but I think (hope?) it will be worth it to many of you.

I’ve blogged previously about the Inspired Writing project that began this summer in my school district. Briefly, all 5th grade classrooms, all 6th grade Language Arts classrooms, and all 9th grade Language Arts classrooms now have ASUS EeePC 1000 netbook computers. (We hope to expand it to grades 5-12 eventually.) Those teachers also went through staff development this summer based around improving reading and writing skills through the use of technology.

At Arapahoe this means that we have 198 new EeePC 1000’s this fall. This gives us a 1:1 ratio in our 9th grade Language Arts classrooms (we have a few sections using Dell laptops that we had previously purchased with grant money), plus we purchased an additional twelve for our Special Services Department, four for our Study Center, and twenty-four for our media center for student check out. (For now, students can check out a EeePC for use in the media center for a class period at a time. Once we get settled in, we’re hoping to expand that for longer time periods and not restrict it to the media center.)

Our district settled on the EeePC’s for many reasons, two of which were licensing costs and imaging issues. We ordered EeePC’s with Xandros Linux, and they utilize our PODnet wireless network to connect to the Internet, meaning that we don’t have to worry about Microsoft licensing costs (they’re running Open Office). And the Eee’s have a built-in restore mechanism that will reset them back to factory condition, thereby minimizing technical support issues (which is critical as my district, like most these days, has had to cut positions).

So one of my self-assigned jobs this summer was to learn more about Linux in order to both support and hopefully improve the implementation of this project. So at NECC I approached Steve Hargadon, who is my go-to person in my PLN for all things open source. For those of you who know Steve, you won’t be surprised that when I finally tracked him down he was running from one presentation to another, but he kindly gave me several names to contact that he thought could help me out. They all did, but one in particular ended up helping me out more than I could’ve expected.

Jim Klein is the Director of Information Services and Technology for the Saugus Union School District in the Santa Clarity Valley in Northern Los Angeles County. When I contacted Jim with some questions, he answered them, but then also mentioned that he had an imaging process I might want to take a look at. Well, not only did he have an imaging process, but he had extensive, step-by-step documentation for how to do it. This documentation is so good that even I, pretty much completely new to Linux, could figure it out. (Jim and I did end up trading well over fifty emails over a variety of questions, which was way above and beyond the call of duty on Jim’s part, but that was mostly due to one typo on the documentation that we eventually figured out and my apparently inexhaustible capability for asking questions.)

So why am I blogging about this? Because I think this is a process that many of you should take a look at for your schools. Basically, here is why I think this image is so good:

So, what did this mean at my school? After tweaking Jim’s image I then put that image on sixteen 4 GB flash drives (the image would actually fit on a 2 GB drive). Creating that initial set of flash drives did take several hours, but now they are ready for any subsequent image I want to put on them. (And you can quickly add two files that Jim calls “Simple Updates” that I used for adding the printer I wanted for each cart.) We have 32 in each of our carts, so I then imaged half of the cart in about 10 minutes, then the other half in another 10. After about 20 minutes, I had a cart of 32 done, with all the apps, shortcuts, printer and settings I wanted, and with a built-in recovery option. Compare this to the Xandros distribution, where I was looking at 30-45 minutes per machine out of the box to get them ready to go, and without a recovery option that kept my settings. (Plus the Xandros by default doesn’t have things like Audacity or Gimp that are part of my image.) When I went to the next cart all I had to do was replace two small files on each flash drive to add a different printer to the image. I was able to have all 198 netbooks ready on day one with students, with the apps, interface and settings we needed.

Here are some screenshots: 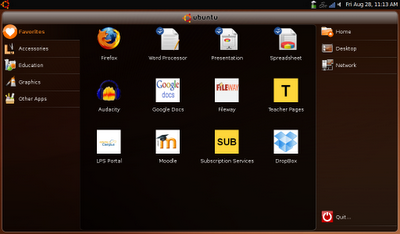 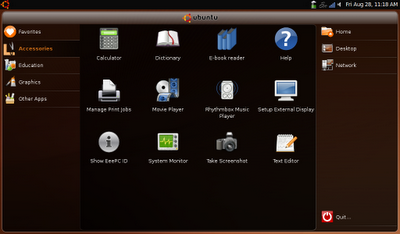 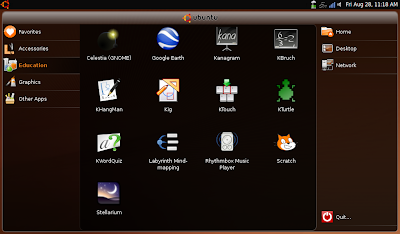 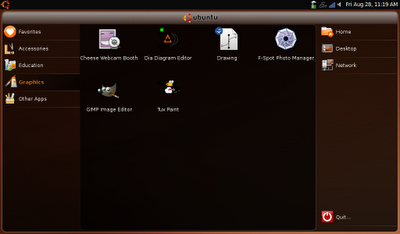 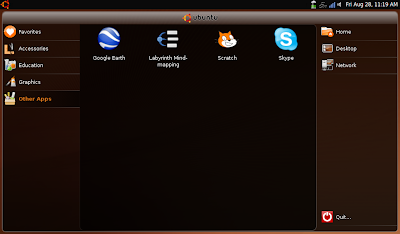 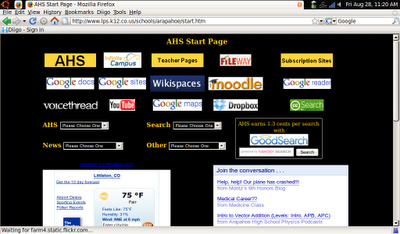 Now, full disclosure, it did take me longer than twenty minutes per cart, but that’s because I decided to do one more thing – switch the functionality of the right-shift key and the up-arrow key. On the Eee 1000’s the up-arrow key is in the place where you naturally press when you try to shift with your right hand. During our staff development, that meant that every time someone tried to capitalize something on the left side of the keyboard, they ended up arrowing up instead of capitalizing. So I went out and found a script on the web, figured out how to modify it for the Eee 1000, and that’s now part of my image. It runs at startup and switches the functionality of those two keys. The reason it took me more than twenty minutes per cart is that after I imaged them, I also took the time to physically switch the right-shift and up-arrow keys on the keyboard. This is not difficult, but it is a pain, and about every ninth or tenth one I messed up the little connector and it would take me anywhere from two to twenty minutes to get it fixed. But, if you chose not to do this, it’s about twenty minutes a cart.

If you have netbook computers in your district, or are considering them, I would urge you – or your tech folks – to take a look at the wiki documentation Jim and his team have created (which includes a ready-to-go image you can download). Also, keep in mind that his image should work on most netbooks, not just Eee’s, although you may have to do a little tweaking. Thanks Jim and team, for making a difference for the teachers and students at my school (not to mention for me personally), and for being willing to share your hard work.

With apologies to Rodgers and Hammerstein . . .

Linux on netbooks and my great P-L-N;
Jim Klein, his wiki and Steve Hargadon;
Meaningful learning tied up with (virtual) string;
These are a few of my favorite things.

When NCLB bites,
When the filter stings,
When I’m feeling sad,
I simply remember my favorite things,
And then I don’t feel so bad.