Well, okay, maybe not a musical. But Anne Smith and her students are doing some creative interpretations:

I decided that rather than me creating the piece of music, it would be a great opportunity to connect music with literature. Gary gave me the suggestion of having the kids connect the piece of music to something they have written. Since we are reading William Shakespeare’s Macbeth in class, we had just completed two papers dealing with Macbeth and Lady Macbeth while watching three film versions (Royal Shakespeare Company -Ian McKellan, Dame Judy Dench, English Shakespeare Company- modern version, and Roman Polansky version) of the first act comparing what each director was trying to show through their interpretations.

My students were quite excited to begin the process of composing a piece of music to fit a character. In period 2, we started talking about Lady Macbeth and her personality. What would we want to show in the song? We decided that we would show her in three stages from act one. We would show her elation at seeing her husband return home, her decision to not let King Duncan leave the castle by killing him so that Macbeth would become king, and finally her anger at Macbeth with his ambivalence about killing the king. We had some students who are as musically inclined as I am and so they worked on the lyrics (a.k.a. quotes) to fit with the music as well as finding visuals to support. The other kids, worked on the song. Amazingly, they all worked so well together testing sounds, putting together measure after measure, playing the notes, time and again. They decided the instruments that would best describe Lady Macbeth (flute) and how her tone would change into a French horn through her change in personality. Then they picked the instruments that would best accompany the sounds of Lady Macbeth. A few different kids took turns running the computer with other kids shouting up their thoughts. It seemed like organized chaos. One thing I must add here is how much I learned by watching and participating with them. I learned all sorts of vocabulary words about music (crescendo, decrescendo, staccato) and how to semi-compose music (you really have to pay attention to the notes you select with each instrument). But mostly, what I am hoping period two took away from today, and what they learned, is that music is a part of literature. When talking with them about the song, they asked my opinion about a particular part. I said it needs to sound like murder. Tristan responded that murder is an A and C sharp. And then another student, John, responding that we need to put in the key of death which is apparently E flat? As my department members were listening into our conversation they were enthralled with what these kids were doing. They were connecting Lady Macbeth’s descent into evil with music. You can hear the three distinct parts which they had mapped out at the beginning of class. It was amazing that I had kids come in on their off-hours to finish the song - and better yet, these were all boys! Boys that were asking to continue the learning. One even asked me at the end if we could do this for every book we read. Tomorrow we are going to play it for the class, make changes, and add the lyrics and visuals.

What was really interesting about the different approaches between my period 2 and period 5 is that it reflected how they have approached learning challenges in the class so far. Period 2 approached it collaboratively all working together, where period 5 broke into groups of music creators and lyrics composers.

examples of what they've created so far, a Picasa web album with pictures of them working, 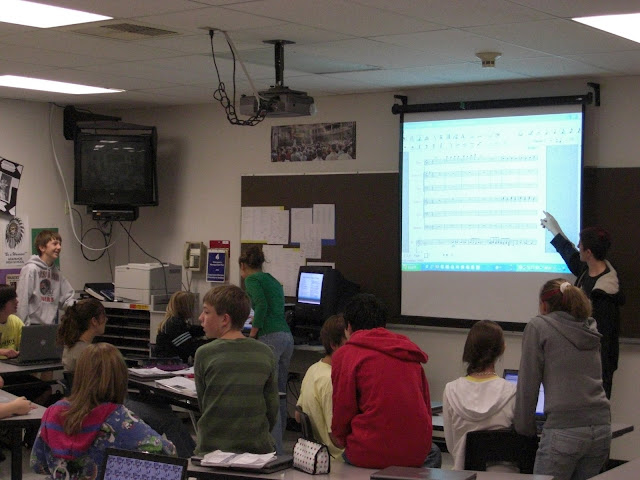 and Anne will upload the final versions for each period once they're finished.

So, what have your students created today?
Posted by Karl Fisch at 6:11 PM