I just wanted to share the tech setup as well as the Ustream archive and some pictures of our video conference on Friday with Daniel Pink. (You can also view the two archived CoverItLive live blogs on my previous post.)

For those that are interested, here was the tech setup. To Skype (and then eventually MeBeam, more on that in a moment) with Daniel Pink, we had a Dell computer with a logitech webcam and snowball microphone connected to it. This was connected to a projector in our Forum that rear projects onto a large screen (we were in the forum because we had four classes with a total of 110 kids or so) so that all the students could see and hear him. Earlier in the week students had submitted their questions on a blog and then Maura Moritz and Anne Smith selected sixteen of them to be asked today (due to time constraints). Each student would come down to the snowball microphone and ask the question of Mr. Pink, and then ask a follow-up or respond to Mr. Pink's questions if he asked them.

Then over on the side we had an iMac connected to a second snowball microphone and a DV camcorder which we used to Ustream the event. The Ustream audience (folks who read about it on my blog or on twitter, plus we emailed all the parents of the students in the classes) could see the student asking the question, a decent shot of the projected screen with Mr. Pink on it, and then hear both of them pretty well.

Next to that we had two Dell laptops, each one moderating the two CoverItLive blogs we had setup. We had two setup because we had so many students live blogging we felt it would be overwhelming to have them all on one live blog. The ninety or so students that weren't asking the questions had the capability of hopping on the live blog (or they could choose just to listen) - we probably had around 50 to 60 or so laptops spread throughout those 90 students, and the students could hand the laptop to the student sitting next to them if they wanted to comment.

Overall, it went well, although for the first time in two years we had some technical difficulties. We've always used Skype for this and it worked well for a while, but then suddenly dropped the call. We reconnected once for a little while, then it dropped again and then wouldn't connect. After trying for a few minutes, we switched over to MeBeam which thankfully worked for us. MeBeam doesn't have quite the same quality as Skype (a little bit of a delay and the video isn't quite as crisp), but it still worked well.

We really appreciate how flexible Daniel Pink was. When we did this last year, we had talked about using MeBeam as a backup to Skype, but we really hadn't talked about any contingencies this year (my fault). When it became obvious that Skype maybe wasn't going to reconnect, I Skype-chatted to Mr. Pink that we should try switching to MeBeam, and then gave him the URL and the room name. He Skyped back that he would, and by the time I switched over and loaded it up, he was there. We had a brief moment when his audio wasn't on (by default when you enter a MeBeam room your audio is off and it's not completely intuitive where to turn it on), but we told him where to enable his audio and then we were good to go (well, after he put some headphones on as we were getting echo). Now, none of that is rocket science, but in my experience that's more than enough to throw a lot of folks, especially when we hadn't talked about it in advance. So I was very thankful that he handled it with aplomb and didn't get flustered with the tech stuff.

Unfortunately, I'd been sick all week and had to visit the doctor later that day so I didn't get to listen to the students reflect about the experience later that day. From my perspective, I thought it went well, and I thought the students did a nice job of asking thoughtful questions. As one person noted in the Ustream chat, they were polite and respectful but not overly deferential to Daniel Pink. And, as has been the case for the two years we've done this (so four times he's interacted with our students), Daniel Pink has been very generous with his time and tries to thoughtfully address their questions.

Here is the archived Ustream (it starts about 2:45 into the archive, I hit record a little too early because I didn't want to forget!) and some pictures that should give you an idea of what the room looked like. 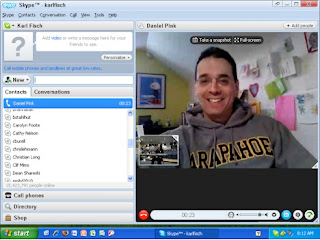 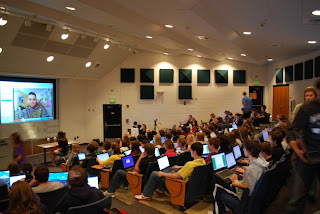 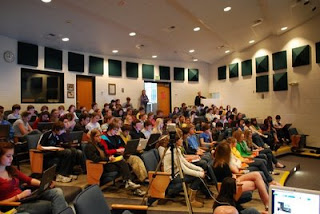 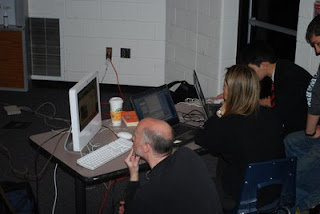 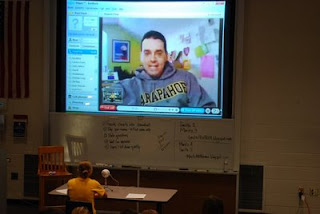 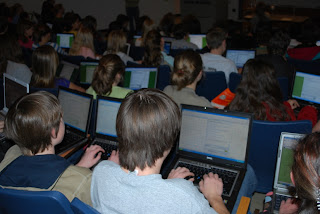 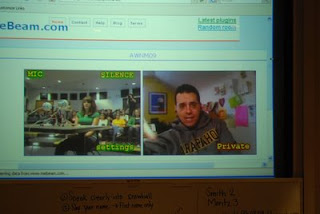 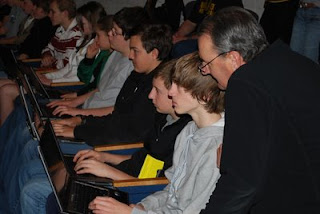 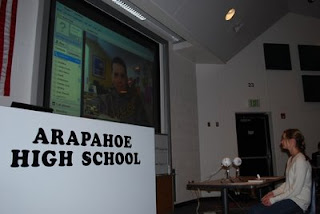 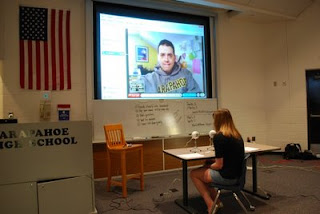 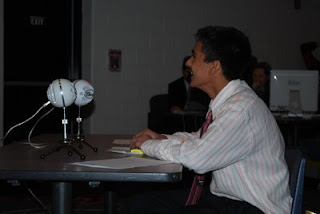 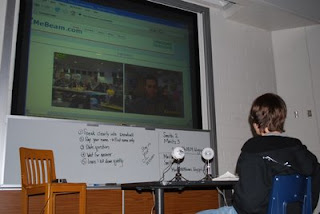 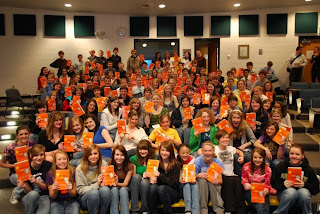