There's a sexting "scandal" in a local school that is getting a lot of media play. This is no doubt a serious issue and one that we should address with our students, but I also think there is a bit of puritanical reaction to anything related to sex and teenagers. I think it's also often a hypocritical one.

When I go to that story on the Denver Post's site, it of course generates some ads on the page that change each time. Interestingly, however, the ads often have quite a few things in common. For example, here are two screenshots from two separate visits to that page. 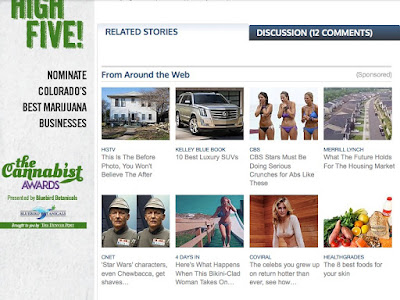 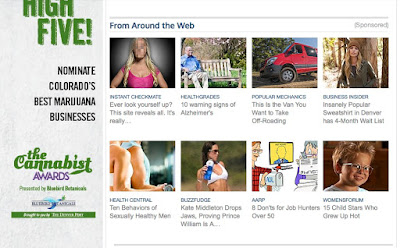 Notice anything? Even ignoring the prominent Marijuana ads (Marijuana and the Broncos seem to be the primary revenue generators for the Post), every time I visit the page I get several prominent pictures of scantily clad women.

Thankfully, it does seem that law enforcement is proceeding carefully and is only planning on charging any students who perhaps coerced or bullied other students into sexting (as opposed to making any student who participated register as a sex offender, which the law does allow). But I certainly think we need to be careful of saying things like,

If the flagship newspaper of our state is willing to put those types of ads on their site, then I think it's pretty hard to go after the "moral and ethic level" of our students. It's not just the Post, of course, take a look at the ads during the Broncos' game today (or your favorite NFL team). Or some of the shots of the cheerleaders that the networks like to include. Not to mention the new Hooters restaurant that opened nearby.

I'm certainly not defending sexting, but I think we need to acknowledge that teenagers are reacting to the culture we've created and promoted. At best we're sending mixed messages, so why are we surprised when our students respond to them in kind?