Galvanize: The Future of (Different) Work

I had the opportunity to present today as part of a local speaker's series put on by the Rocky Mountain Chapter of the International Interior Design Association. I talked about the usual things I talk about regarding education, and really focused on the need for them to get involved as parents and community members to help their schools make the "shift."

The reason for this post, however, was the location. It's a place (space) called Galvanize. Coincidentally, as I was driving down there this morning I heard this story on NPR about Galvanize (just a tad bit intimidating to hear right before you're about to present). Galvanize describes itself this way:


Galvanize creates an “innovation ecosystem” designed to give entrepreneurs and innovators the best chance of success at the start of their next (or first) big thing. Through the three pillars of Capital, Community, and Curriculum, Galvanize builds a community greater than the sum of its parts to spark disruptive ideas and breakout companies.

After I presented they were kind enough to give me a tour and talk for a bit, and I found it fascinating. It's really a community of startups, a space for entrepreneurs to gather, work, intermingle, innovate, learn from each other, and generally create new stuff. (The second and third pictures at the bottom of this post show you most of the companies that are currently there.)

There are three levels of space that companies can lease (month-to-month, no long-term commitments necessary). There is an "open" area that is just a wide open space with various types of furniture and the tenants don't permanently occupy any of the places. It's typically used by companies just getting started, with maybe 1-5 employees or so. One step up (in terms of cost and also physically - it's on the second floor) is "permanent" spaces where you have a designated spot and the companies might be a bit larger. Then there are suites that are even larger still. It's configured so that as companies grow and expand, they can move between the spaces, until they are perhaps ready to move out into their own space if they are successful enough. (I'm probably not doing this justice, but it will give you an idea.)

They also have an education component, called the "G School," which is an intense, six-month coding course (currently Ruby on Rails). It's small (20 or so students at a time), but they guarantee that you'll get a job at a minimum of $60,000 within a certain time period after graduation or they refund your tuition. (The class that just graduated averaged $74,000.) It's a place with very high energy and I'm hoping to go back with a group of teachers and students to visit. (I'm also thinking that some of our students might be interested in applying. You have to have some background in coding, but you don't have to be an expert.)

It reminded me very much of the ideas in two previous posts about the changing world of work:


I'd like to see my future principal lead our school community in a discussion of what this means in terms of how we're preparing our students for the world of work. I'd also like to see a discussion that might be even more important – is the basic structure of how we are educating our students compatible with the emerging structure of the world of work? Are 59-minute classes, with bells that ring and fixed curricula, with grades and class ranks, with high-stakes tests (that are most certainly not “open book” much less “open Internet”) and rigidly set schedules really the best way to go about this?

Imagine an office [school] where meetings [classes] are optional. Nobody talks about how many hours [credits] they worked last week. People have an unlimited amount of vacation and paid time off. Work [learning] is done anytime and anywhere, based entirely on individual [student] needs and preferences. Finally, employees [students and staff] at all levels are encouraged to stop doing anything that is a waste of their time, their customers’ time, or the company’s time. [bracketed comments mine]

and how perhaps work and learning can exist side-by-side:


I think networked learning has the possibility to replicate (or actually improve on) much of the outside-of-class-but-still-academic learning that takes place in some college settings. I can also envision a different, but still similar, environment that doesn't require a college campus. What if students right out of high school gathered in an urban area, working for employers who believed that young people can (and should) learn and work simultaneously (check out this post for Harvard Business Review by Michael Schrage)? What if those employers also believed that formal learning and working was only part of life, and that their young employees should be heavily involved in the communities in which they lived? Would four (or more) years of that be valuable? Could it replicate (or improve upon) the college experience?  Especially when you take into account that the "students" would be earning money, not just spending it, and contributing to economy by producing (not just consuming), and not spending four years accumulating debt.

The entire time I was touring Galvanize I kept thinking, "Is there a way to transform my school to look and operate like this?" Here are some really bad cellphone pictures I took, although the NPR story has some better ones. 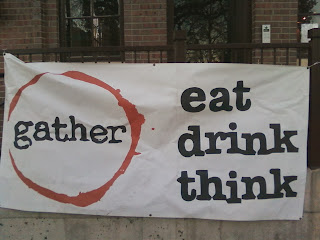 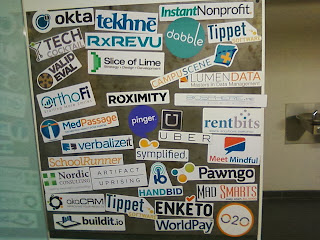 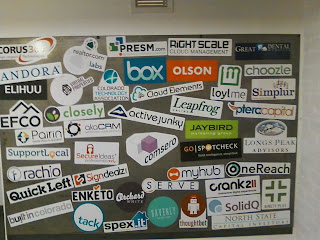 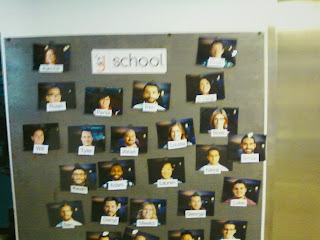 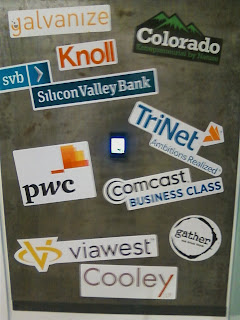 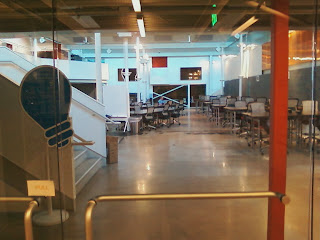 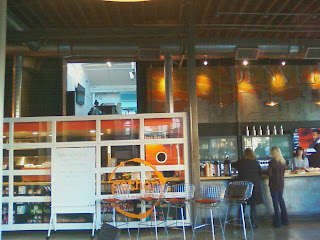 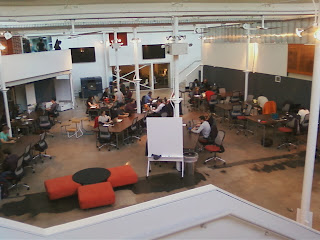 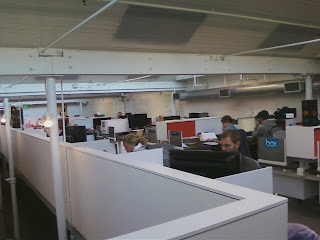 I'm still processing my morning there, but I think there are many implications for K-12 education, ranging from how (and for what) we are preparing our students, to the spaces we are preparing them in, to the culture of the learning (working) space itself.
Posted by Karl Fisch at 7:13 PM