I spent the last two days in some district-provided professional development around the Common Core Math Standards. Overall it was a pretty good two days, in spite of my misgivings about Common Core in general, and other than I went away somewhat depressed with my own ability to do this well (but that's another post or three).

I wanted to take a moment to put down some thoughts/questions about a couple of problems we did today. Early in the day we did an activity where we were rating the complexity of various problems. One of the problems was:

The group generally agreed that this was not an overly complex problem, but there was a debate going on about exactly how complex it was. Because this was after rating a bunch of other problems, I was growing a bit tired of this (I see some value in comparing problems, but it felt more like we were determining where this would fit on the PARCC test and not discussing what a good problem looks like), so I said I thought this was really a 1 (being the least complex, and the debate previously was between whether it was a 2 or a 3).

I basically said something like, "Well, if your goal is simply to solve it and enter an answer, then I'd just use Desmos. How hard is that? It's a 1." (Yes, I know, I can be a pain sometimes. But they invited me.) 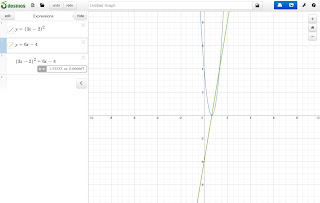 A little later in the day (or maybe it was earlier, I've lost track now) we then encountered this problem: 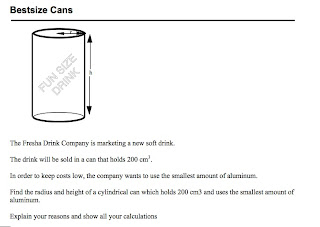 Once again we worked with it for a while and analyzed the complexity of the task and what students would need to know in order to complete the task. This time the discussion was about how difficult it was to find the minimum and how much that should factor into the complexity of the task. Again, I brought up Desmos, and suggested that if the students knew the appropriate formulas, this was a relatively trivial problem. 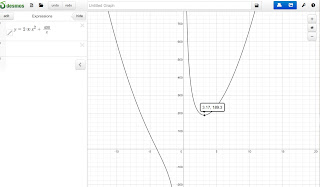 The scoring rubric we looked at assumed most students would make a table of values and the points they got was determined by whether they got the formula, did the substitution, and then how precise they were with their guess-and-check.

Now, I'm not saying that's a bad way to do this, but I think it brings up an interesting question. Let's assume this is not a calculus course where we're talking about finding maximum and minimum, and I think that's not a bad assumption to make considering it was labeled a Geometry problem (and considering that Calculus is no longer the assumed capstone course in Common Core - heck, even the College Board apparently agrees). So, in the age of Desmos, or Wolfram Alpha, or whatever, how much value is there in finding minimums and maximums by tables of values, or by factoring, or even by calculus?

I'm not saying there isn't value in those approaches, but I found it interesting that no one other than me thought to graph it (and these folks proved over the two days that they are generally brighter than me mathematically). I don't know this, but I would guess the reason is because they either don't know about Desmos (although most had graphing calculators with them), or simply don't think of a graph to solve this because we think like math teachers and graphing has always been difficult.

So I'm not making any grand pronouncements (for once), but I'm curious what the math folks out there think about this (and similar issues). What should be our "minimum" expectations?

Update 8-8-13: Desmos suggests perhaps having students design the can.
Posted by Karl Fisch at 4:48 PM