I was part of an interesting discussion on Twitter Friday night and I wanted to share it here, as well as add a few final thoughts. Participants that I reference are Bud Hunt, Brian Crosby, Dean Shareski, Anne Van Meter, Barbara Barreda, and Karen Fasimpaur. Thanks to all of you for helping me think through these ideas.

The discussion started with a tweet from Bud Hunt where he shared some of what his school district is doing with Twitter. Here’s part of the tweet trail (I’m sure there were comments from other folks as well, but these are the ones I remembered and grabbed). 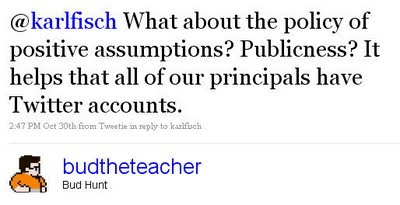 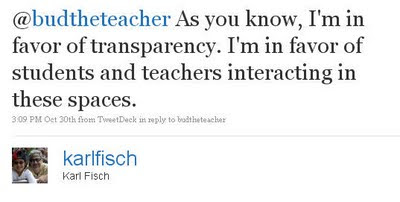 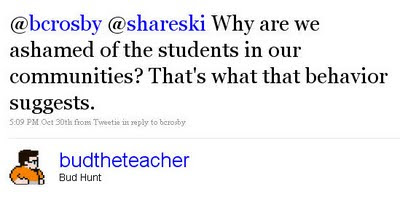 I just want to add a few concluding thoughts. First, full disclosure, Bud called me on his way home from work and we talked for a while about this.

Second, I wasn’t arguing against what Bud’s district is doing. In fact, I really, really like what they’re doing, I was just trying to explore the ramifications and think through some of the issues.

Third, I wanted to “finish” my part of the discussion with Karen that was interrupted by my having to go make dinner. This is what I would’ve tweeted next (is this then a set of retroactive tweets?):
Now, I actually might have tweeted something different because there probably would’ve been some replies in there that would have altered my thinking, but you get the idea.

Transparency and community building by teachers, schools and districts is something I very much support, and I think what St. Vrain is doing is very compelling and very interesting, but I also think it’s uncharted territory and there are some pretty complicated issues involved. This is a really important conversation to have, so I’d love to hear your thoughts on this.
Posted by Karl Fisch at 2:51 PM