More Than a Passing Trend

I wrote an email to an editor at the Denver Post last Sunday in response to an editorial titled, Twitter: A Medium without a Message (please read it before reading the rest of this post).

Now, this is somewhat ironic because, while I certainly use Twitter, I'm not a frequent user compared to many folks and I don't necessarily think it's the greatest thing since sliced bread. But I truly felt like he was missing the point somewhat, and he generally seems like a thoughtful guy (even if I don't always agree with him), so I dashed off a quick email in about eight minutes or so.

I then tweeted about it (of course) and wondered a couple of things. First, I wondered:

Why did I feel like email was a more "personal" way to connect with Dan Haley?

Then I wondered this: 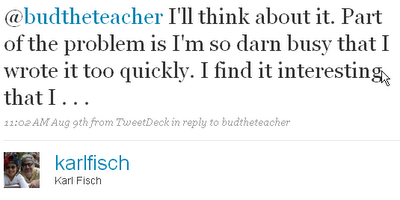 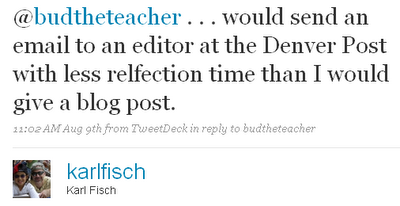 Why would I give less thought and care writing an email to an editor of the Denver Post then I would to a blog post? Perhaps Jenny Nash got it right that it's due to the perceived audience:

In any event, I've obviously decided to repost it here, with the caveat that, again, I'm not sure it really does justice to the argument I was trying to make. So, I'm counting on you guys to add to it in the comments or link to posts that are already created about the value of Twitter, just in case Dan Haley stops by.

So, here's the email I sent (unaltered, much as I would like to refine it before posting it here)

I read your editorial today about Twitter and wanted to share a few thoughts. While I'm not a huge Twitter user, and I won't argue that it's the greatest thing ever, I think one of the reasons you're not finding it valuable is that you're following the wrong people. Part of that you can't help, as you said politicians are "the people you 'follow' for a living." The problem is that most politicians use Twitter in one of two ways. As you indicated, they either use them as glorified press releases, or as a way to appear "folksy" to their constituents. There's nothing wrong with that, but it's not all that interesting and, as politicians, they're somewhat constrained from being "real" on Twitter because it could come back to haunt them. You also mentioned celebrities and, well, unless you're really interested in a particular celebrity, most of them aren't that interesting either.

As an example, I'm an educator that's passionate about trying to meet the needs of our students in a world that is vastly different than the one that most educators grew up in. So I mostly follow other educators who are thinking and writing and linking and tweeting about education. There is a bias toward tech using educators, partially because that's my role in my school - technology coordinator, but also because those folks have a higher presence on Twitter. But I also follow interesting folks that aren't specifically educators writing about teaching and learning but are always finding interesting and relevant ideas and information that help me do my job as an educator - and as a citizen. Every time I dip into Twitter I always find a relevant resource or tool I can share with the teachers in my building, or a link to a blog post or a website or a podcast or a video that helps my thinking around what education should look like. I have teachers on six continents - most of whom I've never met face-to-face - but I learn from them every day.They are part of my own Personal Learning Network, an extended network of people around the world that I can not only learn from every day, but that I can connect teachers and students in my building with to help them teach and learn in a rapidly changing, technology-rich, globally-interconnected world.

Yes, I also find many tweets that aren't along those lines, that are more "personal" if you will, but that's a huge part of community building. Just as in face-to-face communication, folks that establish trust and some personal connection have a much better chance of connecting around more significant issues as well. I would guess that at the Post, teams of people that have some personal relationship and connection are more productive in the long run, particularly around big issues or projects, because they have a relationship that's more than "just" business, and they have some common frame of reference. It's the same on Twitter, and some of those "this is what I'm doing" type tweets help establish that.

So, while I agree that there is a lot of hype about Twitter right now, I would ask you to take a closer look at it. I would ask you to get beyond the press releases and the celebrity gossip, and talk with some folks that were using it before the hype and that find tremendous value in it. (I can connect you with some very thoughtful folks using Twitter if you'd like.) It doesn't matter if Twitter is the particular tool that has staying power, or whether something else comes along to replace it. What matters, and what should be interesting to you as a journalist, is how thoughtful folks are using it to help them learn, grow and be more productive. Surely that is more than simply a "passing trend."