The Invention of Air, PLNs, and School Transformation

I just finished reading Steven Johnson’s The Invention of Air. It’s the story of Joseph Priestley’s scientific discoveries, religious and political thoughts, and his influence on the founding thinkers of the United States. But it’s also a history of his Personal Learning Network (starting with “The Club of Honest Whigs,” which included Benjamin Franklin and Richard Price), and, combined with Richard Florida’s work, has me thinking again about the optimal conditions for learning at our point in history.

Consider this quote from page 51:

Ideas are situated in another kind of environment as well: the information network. Theoretically, it is possible to imagine good ideas happening in a vacuum . . . But most important ideas enter the pantheon because they circulate. And the flow is two-way: the ideas happen in the first place because they are triggered by other people’s ideas. The whole notion of intellectual circulation or flow is embedded in the word “influence” itself (“to flow into,” influere in the original Latin). Good ideas influence, and are themselves influenced by, other ideas. Different societies at different moments in history have varying patterns of circulation: compare the cloistered, stagnant information pools of the European Dark Ages to the hyperlinked, open-sourced connectivity of the Internet.

This describes nicely how I think about my Personal Learning Network, and how social and professional networking in general can help circulate, discuss, and refine ideas. Ideally, this would also describe schools; places that were not defined as much by prescribed curricula, but by a climate of intellectual curiosity and a culture of ideas, where good ideas influere other good ideas.

He continues on page 52:

The idea of proprietary secrets, of withholding information for personal gain, was unimaginable in that group. . . .But Priestley was a compulsive sharer, and the emphasis on openness and general circulation is as consistent a theme as any in his work. . . No doubt Priestley saw farther because he stood on the shoulders of giants, but he had another crucial asset: he had a reliable postal service that let him share his ideas with giants.

The label “compulsive sharer” describes quite a few of the folks in my PLN, and tools such as blogs, delicious, Twitter, rss feeds and Skype help enable that compulsive sharing. Priestley’s aversion to proprietary secrets also seems to apply to the folks in my PLN, where the ethos is “the more you share, the more you learn” – and the more we all benefit. I think Priestley would also appreciate Creative Commons. But I wonder how many of our schools – and the educational processes we have in place - really encourage compulsive sharing, either in-person or virtually?

The open circulation of ideas was practically the founding credo of the Club of Honest Wigs, and of eighteenth-century coffeehouse culture in general. With the university system languishing amid archaic traditions, and corporate R & D labs still on the distant horizon, the public space of the coffeehouse served as the central hub of innovation in British society.

. . .You can’t underestimate the impact that the Club of Honest Whigs had on Priestley’s subsequent streak, precisely because he was able to plug in to an existing network of relationships and collaborations that the coffeehouse environment facilitated. Not just because there were learned men of science sitting around the table – more formal institutions like the Royal Society supplied comparable gatherings – but also because the coffeehouse culture was cross-disciplinary by nature, the conversations freely roaming from electricity, to the abuses of Parliament, to the fate of dissenting churches.

Later he returns to the idea of compulsive sharing and documenting not only the product, but the process (page 63-64):

Part of this compulsive sharing no doubt comes from the fact that one of Priestley’s great skills as a scientist was his inventiveness with tools. He was a hacker, not a theoretician, and so it made sense to showcase his technical innovations alongside the scientific ideas they generated. But there was a higher purpose that drove Priestley to document his techniques in such meticulous detail: the information network. Priestley’s whole model of progress was built on the premise that ideas had to move, to circulate, for them to turn into better ideas. . . . It was a sensibility he shared with Franklin:

These thoughts, my dear Friend, are many of them crude and hasty, and if I were merely ambitious of acquiring some Reputation in Philosophy, I ought to keep them by me, ‘till corrected and improved by Time and farther Experience. But since even short Hints, and imperfect Experiments in any new Branch of Science, being communicated, have oftentimes a good Effect, in exciting the attention of the Ingenious to the Subject, and so becoming the Occasion of more compleat Discoveries, you are at Liberty to communicate this Paper to whom you please; it being of more Importance that Knowledge should increase, than that your Friend should be thought an accurate Philosopher.

This resonates for me in relation to my own blogging, where I often think of blogging as “rough draft thinking”, or “thinking in progress,” and where I count on commenters and linkers to help me refine my own thinking. I believe one of the big hurdles for getting folks in my building to blog professionally is their fear of not having a polished piece of writing, or of being not completely correct about something. (These are both things I’ve obviously overcome!) But that seems to fly in the face of how so many of the scientists and philosophers that we revere in this country did their own thinking and sharing and, with the amazing ability we have to share today, it saddens me to see how few of us are really taking advantage of this capability (both professionally and with our students).

Further into the book, on pages 73 and 74, Johnson takes up information networks:

The true shape of an idea forming looks much more like this: 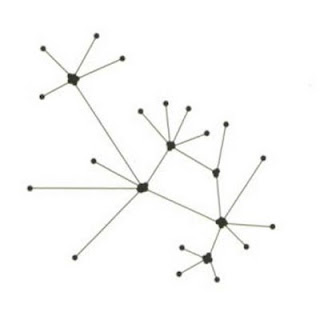 That network shape is one of the reasons why external information networks (the coffeehouse, the Internet) are so crucial to the process of innovation, because those networks so often supply new connections that the solo inventor wouldn’t have stumbled across on his or her own. But the long life span of the hunch suggests another crucial dimension here: it is not just the inventor’s social network that matters, but the specific way in which the inventor networks with his own past selves, his or her ability to keep old ideas and associations alive in the mind.

To me, this describes tagging and the digital archiving (and sharing) of thoughts, so that not only can you learn from others, but you can go back and reflect on and learn from your own “past self.” I believe we miss so much, and our students miss so much, because we view so much of what we do as transitory, and not worth keeping or revisiting. What is it about self-reflection (again, both professionally and with/by our students) that worries us so?

Toward the end of the book, on pages 204-206, Johnson makes the connection again to modern information networks:

More important, though, the values that Priestley brought to his intellectual explorations have never been more essential than they are today. The necessity of open information networks – like ones he cultivated with the Honest Whigs and the Lunar Society, and with the popular tone of his scientific publications – has become a defining creed of the Internet age. . . . An idea that flows through society does not grow less useful as it circulates; most of the time, the opposite occurs: the idea improves, as its circulation attracts the “attention of the Ingenious,” as Franklin put it. Jefferson saw the same phenomenon, and interpreted it as yet another part of nature’s rational system: “That ideas should freely spread from one another over the globe,” he wrote in an 1813 letter discussing a patent dispute, “for the moral and mutual instruction of man, and improvement of his condition, seems to have been peculiarly and benevolently designed by nature, when she made them, like fire, expansible over all space, without lessening their density at any point, and like the air in which we breathe, move, and have our physical being, incapable of confinement or exclusive appropriation.”

, , , Building a coherent theory of the modern world without a thorough understanding of [the Internet] would have struck Priestley as a scandal of the first order.

This speaks to me so much of our often misguided Internet filter policies, the idea that by restricting the flow of ideas we are somehow protecting our students. And, again, it reinforces the concept of openness, and the sharing of student and teacher work, and that through this sharing, this cross-pollinating of ideas, we progress and improve not only as teachers and students, but as a society (see Mark Pesce’s Capture Everything, Share Everything, Open Everything, Only Connect)

The faith in science and progress necessitated one other core value that Priestley shared with Jefferson and Franklin and that is the radical’s belief that progress inevitably undermines the institutions and belief systems of the past. . . . You could no longer put stock in “the education of our ancestors,” as Jefferson derisively called it. Embracing change meant embracing the possibility that everything would have to be reinvented. . . .One thing is clear: to see the world in this way – to disconnect the timeless insights of science and faith from the transitory world of politics; to give up the sublime view of progress; to rely on the old institutions and not conjure up new ones – is to betray the core and connected values that Priestley shared with the American founders . . . How can such a dramatically expanded vista not make us think that the world is still ripe for radical change, for new ways of sharing ideas or organizing human life? And how could it not also be cause for hope?

I think this is one of the huge struggles we’re facing as we try not so much to reform education, but to transform it. Schools as we know them are comfortable, and safe. But if “progress inevitably undermines the institutions and belief systems of the past” and we should “no longer put stock in ‘the education of our ancestors,’” then we will have to face the uncomfortable and deal with disruptive innovation.

We are going to have to seize on the current crisis to make transformative change and conjure up new institutions – or least new learning paradigms. One of our core values must be to seize these "new ways of sharing ideas or organizing human life," to be compulsive sharers and utilize these tools and our learning networks to transform our schools, our communities and our world.

Will that be difficult? Sure, but it’s necessary and it’s time. And, while perhaps difficult, “how could it not also be cause for hope?”
Posted by Karl Fisch at 8:10 PM