Random Thoughts from the NCTE Convention

This will not be any kind of coherent post, just some miscellaneous thoughts from the annual NCTE Convention. (I know, I know, how will you tell the difference?)

Did You Know? Has Jumped the Shark
Gary Stager tweeted a week or so ago that Did You Know? had jumped the shark because his Mom sent him the link (and, the horror, she was proud that he knew me). Then a remix of it played twice on Sunrise, a popular morning show on Australian TV. But I think the culminating piece of evidence is this picture that Bud Hunt made me take. 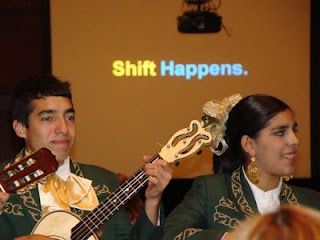 At the opening celebration for the NCTE Convention, they had it playing in a continuous loop for 60 minutes. But they also had the sound turned down and a mariachi band playing – so picture Did You Know? with mariachi music and light appetizers. Too. Funny. Oh well, Henry Winkler’s done okay since then, hasn’t he?

Greg Mortenson
We went to listen to Greg Mortenson, author of Three Cups of Tea, speak, and we sat in the front row because Anne wants to try to get him to blog with her students about the book. Just before he’s about to begin I start to take a picture of him. But he sees me and immediately walks over, puts his arm around me, and hands the camera to Anne to take a picture of us. After that about fifty people came up to have their picture taken with him. I’m guessing he just knows that’s going to happen so picks somebody out to start the process, I just happened to catch his attention. It was a little awkward, since I wasn’t trying to get my picture taken with him, and I’m still not sure Anne has forgiven me (even though – for the record – it was completely and utterly not my fault).

For folks that liked Three Cups of Tea, you’ll be excited to learn that they’ll be releasing both a children's version and a young reader’s version in January, both of which should be more accessible to younger readers. You might also look at the Pennies for Peace program.

Anne and Kristin
I was part of two presentations at NCTE. Anne and I were the featured presentation on Saturday morning, but it was 8:00 am so sparsely attended. But on Friday Anne Smith and Kristin Leclaire presented and it was fabulous – I predict that NCTE will be inviting them back to do some great things very soon. 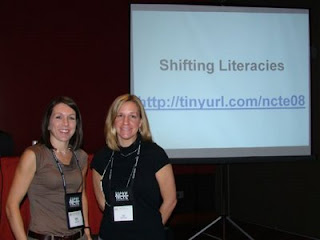 Technology
Let’s just say that for a conference that was titled “Shift Happens,” 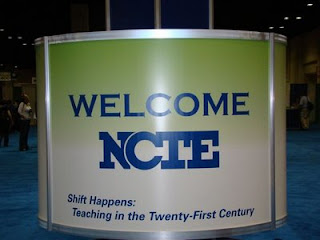 the wireless access was, ummm, pretty “shifty”. I know it’s expensive, but when is it going to be a given that when anyone gets together for learning, especially educators, wireless is a necessity, not an option? Bud Hunt has more thoughts on this, and so do his commenters.

In addition, every single session I was in, including both of the ones I was associated with, had technical issues with the projectors and/or the microphones. Some of that is to be expected with that many sessions, but 100% with problems? I don’t think so.

Miscellaneous Quotes From My Notes

If we really want students to succeed in the future, we have to allow them to work in a participatory and collaborative way.

They did all this work outside of school because our filters wouldn’t let them find these things.

We invited the superintendent, adminstration, etc. – not one of them took the invitation. That was disappointing.

Teachers will incorporate bits and pieces, but it was still the same basic curriculum – we needed to change the whole thing.

'They’re on a computer, that’s not English' – but they were doing more reading and writing than in their other English classes.

We believe kids can’t look critically at the world until they figure out who they are.

We should think of ourselves [teachers] as the Designer of the Learning Experience.

Every teacher will have to be tech savvy.

They don’t have to be where the information is.

Blogging is reading, with the intent to write. (Quoting Will Richardson).