I ran across a couple of interesting posts from ReadWriteWeb that show the changing nature of politics in a read/write, searchable, always-connected world.

First, this points to a post on the Google blog that includes a real-time graph of search terms during the vice-presidential debate. 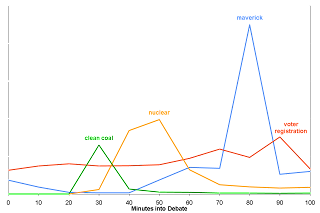 Many people were simply interested in understanding the meaning of particular terms. Governor Palin called Senator McCain a "maverick" several times, sending many viewers to Google to query definition of maverick, what is a maverick, and define:maverick.

When Biden mentioned that the "theocracy controls the security apparatus" in Iran, users searched for the meaning of theocracy — as they did when he spoke of the windfall profits tax.

Go read the post as they go on to discuss problems with spelling (nuclear, Ahmadinejad, and McClellan/McKiernan), searching for historical references, and checking on which Article of the Constitution actually talks about the executive branch. 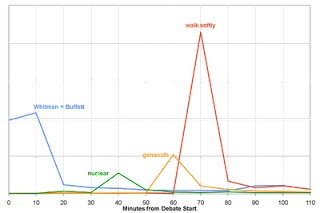 Similar to last Thursday, people sought to understand the meaning of several words mentioned in the debate: morass, commodity, junket, cynicism, and cronyism to name a few. In the chart below you can see four of the most popular queries during the debate. People were quite interested in both Meg Whitman and Warren Buffett, who were mentioned as potential candidates for the Secretary of Treasury, but the biggest rising query was Senator McCain's paraphrasing of Theodore Roosevelt's motto. Both candidates spoke against genocide while discussing the role of the United States as a peacekeeper, and as we saw in the vice presidential debate, nuclear energy and weapons were prominent topics.

They go on to talk about differences in searches from swing states, which reminds me a little bit of one of the things I was thinking about when I created 2020 Vision (Google having access to so much disparate data and the ability to possibly bring it together in unique ways to discover new “truths” – could be used for good or evil, I know). I think both of these are fascinating examples of how our ability to access information in real-time can make substantive changes in the way we do almost everything.

The second post on ReadWriteWeb had to do with CurrentTV and Twitter’s collaborative broadcast of the first presidential debate.

In 1960 seventy million people watched Kennedy and Nixon engage in the first Presidential debate ever broadcast live on TV.

These days things are different. Tonight, far fewer people probably watched the Current.tv and Twitter collaborative broadcast of Obama v. McCain - but scores of them participated, 140 characters at a time. It worked very well. You can get some idea from the 1 minute of video embedded below.


I agree that things are definitely different, but I think I would have trouble watching, listening and reading the tweets. It’s that old multitasking thing again, but some folks can probably do it much better than I can. But whether I like it or not, things are definitely changing. I could see a debate in the near future when the “spinners” from each campaign are doing live text commentary overlaid on top of the video.

Even more interesting and useful, I think, would be delayed text commentary (or even audio or video) overlaid on top of the debate. Where you get some very knowledgeable folks with an historical perspective (and not overly partisan) to give insightful commentary (text, audio, or video) as you view the debate, with links embedded for viewers that want to learn more. What a powerful learning experience that could be, whether you watched the debate live and then watched it again, or perhaps even skip the live debate and just watch the "enhanced" version.

While it would take more time to view the debate that way, I think it has the potential to be much more useful. For me, I’ve always wondered about how valuable the debates really are. I know that’s a somewhat heretical view, but I’m not sure how much being a good debater – particularly the way our current political debates are run – is related to being a good President. It’s such an artificial situation – questions that are unknown in advance and often unrelated to each other, with a limited amount of time to answer them, and without being able to tap into other resources (both information and human resources). Which is why the answers always end up being mostly unsatisfying, playing to sound bites and talking points. I sure hope that’s not how our President operates day to day. (And, yes, the parallels to the artificial situations we have in school are striking, and somewhat depressing.)

When you look at our current presidential candidates, neither one is a particularly good debater. Senator Obama gives a good speech but tends to ramble in a debate. Senator McCain does well in town hall situations, but doesn’t do particularly well in a debate, coming off as too rehearsed and too much of a scold. And, like in pretty much all political debates I’ve seen, they often answer a very different question than the one that was asked. While I think debates can provide some insight into the character of each candidate, I really don’t think that completely parallels how good of a Chief Executive they would be. It’s a setting that will not be repeated as they perform their job duties, yet we continue to act as though the debates are the ultimate test of whether a candidate is prepared to be President. Yes, I want them to be able to function in such a setting, but I don’t think the “best” debater is necessarily going to make the best President.

Sorry for the digression. In any event, I think the read/write/searchable/participatory/real-time/always-connected web has great potential to make citizens much more informed and knowledgeable voters. Just like the ability to access information illustrated by the real-time searching on Google, the ability to connect with others anywhere in the world in real-time (or delayed time, for that matter) can also make substantive changes in the way we do almost everything. And doesn’t that mean schools need to help students learn how to do these things really, really well?
Posted by Karl Fisch at 9:24 PM