As the culmination of their study of A Whole New Mind, Anne Smith and Maura Moritz’s students had to complete a Wikified Research Paper. Here are links to the four wiki pages that have links to the students' wikis. (You’ll have to explore a little on each student’s wiki, some of them have their final paper on the home page of the wiki, others on a page titled Final Draft, and still others with various other page names .) There are over one hundred of these, so I certainly don’t expect anyone reading this to go read all of them (I certainly haven’t), but you might pick a couple from each class at random to read and then leave them some constructive feedback on the discussion tab of their wiki.

I wanted to take a moment to once again thank Daniel Pink and the folks in my network who helped us out with this project. Your participation, thoughts and insights are much appreciated.

Because a few folks asked, I also wanted to share a few of the technical details of the video conference with Daniel Pink. We brought all four classes together in our Forum (our large lecture-hall type classroom – the only one large enough for a group this size – around 110 students) for two hours (in-school field trip for the students). We connected with Mr. Pink via Skype. On our end we had a Dell computer that was connected to a large rear-projection screen that’s part of our Forum, as well as to speakers in the ceiling of the Forum. We used a Logitech Ultravision webcam (slightly newer version of it) for the video, and a Blue Snowball Microphone for the audio. On his end I believe he was using his Mac with the built-in iSight camera. He was also wearing headphones to minimize the audio feedback. (Skype appeared to do a great job with that – his wearing headphones helped us out, but we couldn’t use headphones on our end because all the students in the Forum needed to hear, but Mr. Pink reported very little audio feedback on his end.)

We had pre-selected twenty questions from students for Mr. Pink to respond to (they’re all in the live blog if you want to read through it), in addition to two general questions to get the ball rolling. Each student came down to the microphone to ask their question of Mr. Pink. After he answered, they could ask a follow-up or clarifying question if necessary. If they didn’t have one, then there were eight students down in front to carry on a very modified fishbowl discussion if they had anything to add to what Mr. Pink said (very modified fishbowl discussion because of the time constraints, having four classes in a lecture-hall setting, and the opportunity to hear from the author himself). The webcam and microphone were positioned to pick up the eight students down in front (as well as the students who came down to ask the questions), so Mr. Pink could hear those comments as well. The remaining students shared about thirty-five laptops and participated in live blogging using CoverItLive (I was on another Dell jockeying the CoverItLive blog).

Finally, we also ustreamed the whole thing (video archive, chat archive). We had a Canon camcorder hooked up via Firewire to a Mac and a second Blue Snowball Microphone positioned at the table with the eight students. I was at a table with a Dell (for the CoverItLive blog and with headphones to verify that the ustream was working) and the Mac (for the ustreaming itself).

Overall, the technology worked really well. The only real issue we had was that the ustream chat doesn’t always make it through our firewall, so I couldn’t monitor that, and we did lose the ustream a couple of times. Thankfully Kristin Hokanson captured the chat and helped me put the various orphaned ustreams back together so we have a pretty good record of the ustream.

Here are a few pictures to get a feel for what it looked like (especially for those of you who watched the ustream and perhaps thought there were only 8-10 students there). 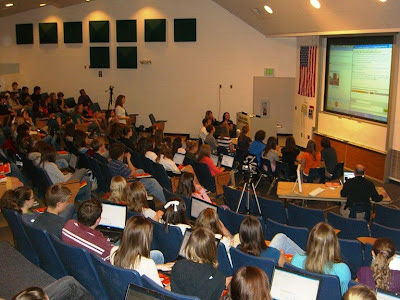 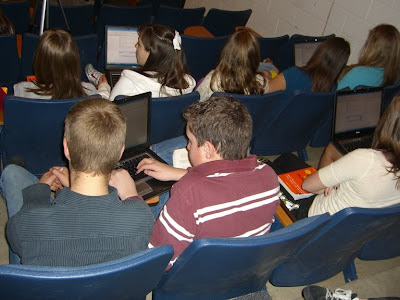 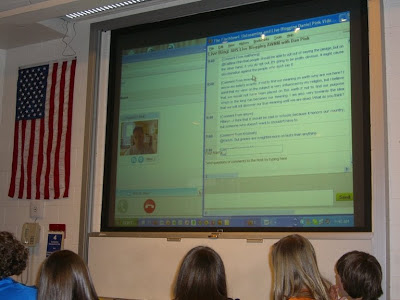 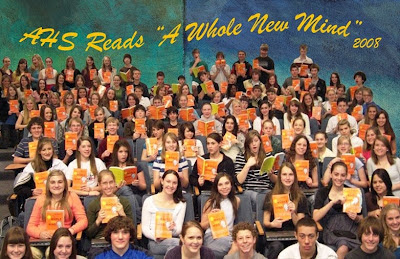 Finally, I want to thank Anne, Maura and the students, for the incredible amount of time, effort and thought they put into this project. There are things we could’ve done better (and will do better next time we try something like this) but, overall, I think it was an amazing learning experience.
Posted by Karl Fisch at 4:03 PM