This post may not seem related to education at first, but more a description of one way you can save money using technology (which I thought would be useful to you guys as well). But I’ll attempt to tie it into education at the end, so bear with me.

We recently changed our home phone service from Qwest to SunRocket, an Internet (voice over IP) phone service that utilizes our Comcast broadband connection. Now if you’ve already gone to a cell-phone-only existence, then you’re already a step ahead of this, but we weren’t ready for that step yet. If you haven’t, this is one way you can utilize technology to get better features at a lower cost. It requires a broadband connection (either Internet over cable or DSL) – which we already have. When you sign up they send you a gizmo (that’s actually what they call it) which connects directly to your modem, and there’s a phone connection on the gizmo. They also sent us a dual-handset cordless phone (expandable to four handsets – additional handsets are about $25 at Office Max among other places) for free.

They then have several plans you can sign up for. We choose the yearly plan for $199 (paid up front, which works out to $16.59 per month). That’s the total price, including taxes and fees. That compares to the $25.18 per month we were paying for Qwest. But for Qwest, that was just for basic local phone service – nothing else (no long distance, no special features). Here’s what we get from SunRocket for $8.59 less per month:

It’s an incredible deal compared to traditional phone service. Here are the drawbacks:

There are voice over IP services available other than SunRocket, but they were the best deal for us. If you have broadband Internet access at home and still have a regular phone line, you might consider looking into it. (Shameless plug for free stuff – if you do sign up, you can enter my home phone number as the “referred by a friend” and I think we’ll get free stuff eventually.)

So, how does this relate to education? Well, let me share a story and see if I can segue into that. When I was a kid, long distance phone calls were expensive (at least my middle class parents thought so, and I know most others did as well). When some of the family would travel somewhere (to visit grandparents or for some kind of trip), we would want to contact home to let them know we got there okay. But a long-distance call was too expensive, so we did what a lot of people did – we gamed the system. We would make a collect call (remember those?) through the operator and ask for Harvey Alkschmeer (who doesn’t exist). The person who answered would say that he wasn’t home right now and we would say that we would try again later. The phone companies didn’t charge for collect calls if the recipient wasn’t there, but the message was delivered that we had made it safely.

Flash forward to today where long distance within the is free with a service like SunRocket (and with many cell phone plans), and is free anywhere in the world with something like Skype (calling from computer to computer – and of course you can include video). In the thirty years since I was a kid and we used a scheme to get around paying for a collect call, communication has changed completely. And it’s not just communication among family members, but it’s communication between two or more people just about anywhere in the world. It’s instantaneous, practically free communication, and supplemented with text, images and video if you want.

I would argue that a critical component of all of your disciplines is communication. Whether it’s communication between two or more people, or between a person and an object, or between axons and dendrites – a whole lot of what we teach can ultimately be broken down to a core concept of communication. So here’s the connection to education. In the last thirty years there’s been an incredible revolution in communication, a change in the very basic nature of how human beings communicate with each other, exchange information, and live their lives. Now take a look at your curriculum. Is it significantly different than it was thirty years ago? If not, and if you agree with my argument that all of your disciplines have communication at their very core, then I’d say we have a problem. I’m not saying that we have to throw out everything we used to teach, but I am saying that if you are teaching basically the same stuff – and in the same way - that you (or your predecessors) were teaching thirty years ago, then you are running the risk of being irrelevant. You should be teaching (communicating with) your students in different ways than thirty years ago, and they should be responding (communicating) in very different ways than their predecessors did thirty years ago. And to be successful in the 21st century, our students will definitely need to master the connected world of today, not the “I’d like to make a collect call to Harvey Alkschmeer” world of thirty years ago. 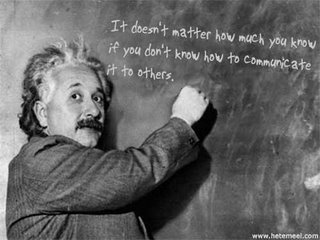