Okay, so this is kind of a silly post that I actually don't believe will generate anything, but I thought it might be fun anyway. We're about to finish our basement and I am not a very visual person, so trying to picture what it might look like is difficult for me. I'm sure we'll get lots of help with that from the contractor and most likely will go with one of the designs they come up with, but I thought it might be fun to see if I could tap into the wisdom of my small crowd.

We currently have a "full," unfinished walkout basement with a wood floor (with some crawl space underneath). We've just finished replacing the furnace, air conditioner and water heater figuring it made more sense to do that before finishing the basement instead of having to go in after. There are two windows and a sliding glass door that lead the backyard. When we adopted Abby we put down the cheapest linoleum we could find in one part of the basement to have a play/craft area for her, and the rest of the basement has just been used for storage.

As you'll see from the pictures, we do have a fair amount of "stuff" down there, but most of it will be gone before finishing the basement. We have lots of empty boxes that we've used as a "wall" to keep the dog out of the storage area, and those will mostly get recycled. We have a whole bunch of boxes of old school stuff, most of which we'll go through and probably get rid of because our philosophies have changed. What will still need to be stored are various holiday decorations, suitcases, and camping stuff (and a few miscellaneous other things).

There are a few things we have planned for the basement area. First and foremost is a bedroom/bathroom combination. This is initially designed for Abby (soon to be twelve) to have a larger space than her currently fairly small bedroom. But it will also be designed for the possibility of one or more of our aging parents to move in with us. Consequently it will need to be designed in an accessible manner, including wider doors and a walk-in shower (no tub). We'd also like it to have a walk-in closet for Abby and/or the parents. It should be large enough to fit a queen bed, a desk, and probably a couple of dressers.

The bathroom should have a sink (probably single), a toilet and that aforementioned walk-in shower, and perhaps a small linen closet. While it will function as a "master" bath for that bedroom, we also want it to be the bathroom for the basement, so therefore we envision it having two entrances, one from the bedroom and one from the rest of the basement.

We also have ideas for the rest of the basement, but they are a bit more flexible. Right now we're thinking a video area (couch and chairs, decently large screen), a mini-kitchen (sink, microwave and cabinets, perhaps with some kind of counter with seating), an area that could be a ping-pong table or a kitchen table if our parents moved in, and perhaps a workout area (big enough for perhaps two machines - treadmill and elliptical, for example). We'd also like to build some limited storage closets in wherever we can.

Here are some pictures (please ignore the junk, it's messier than usual as we just shoved stuff every which way as they were putting in the new furnace, water heater and ductwork) to try to give you an idea of what it looks like right now. 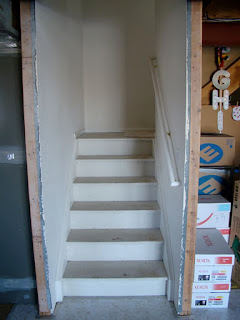 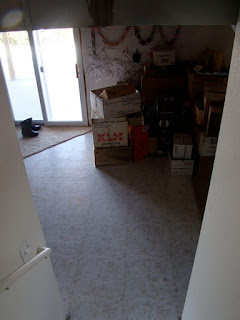 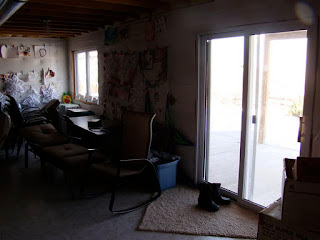 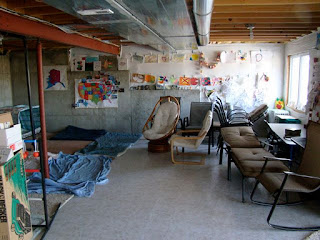 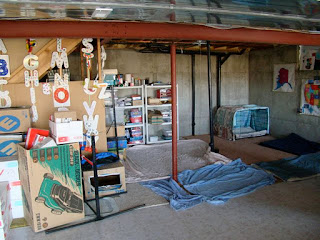 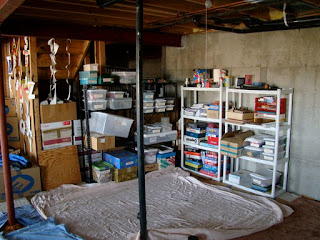 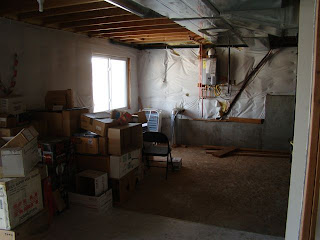 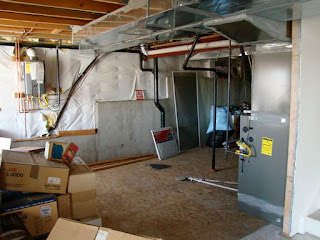 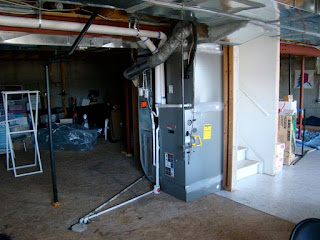 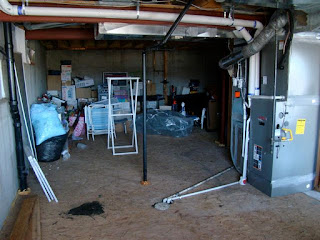 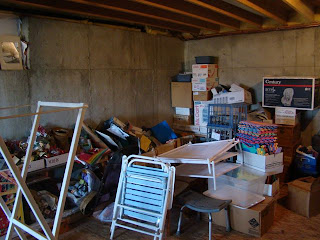 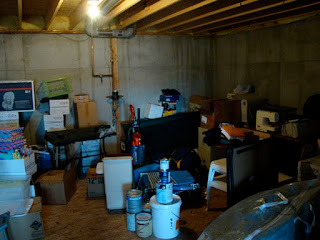 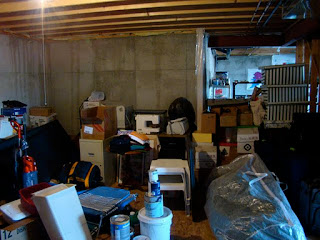 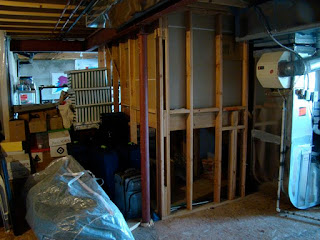 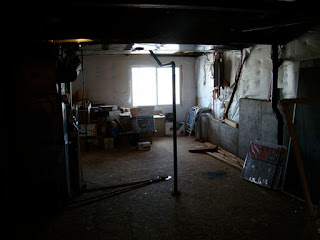 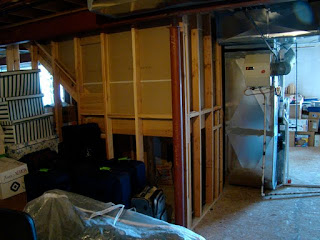 I used both graph paper and the free Autodesk Homestyler to get a rough layout of the basement. Here's the graph paper version: 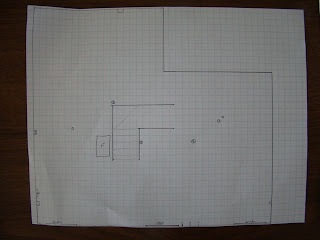 And here's the Homestyler version:

These are reasonably accurate in terms of measurements, but could be off by as much as a foot or so in any given dimension. The brown rectangular shapes are my lame attempt at indicating pre-existing obstacles, such as the furnace (that's the big one), on-demand water heater (against the wall), support poles, and drainage pipes (the drainage pipes could possible be moved). You can also see the sliding glass door and the two existing windows at the "bottom."

Here's my first attempt at coming up with a layout (as you can tell, I'm not much of a designer):

So, as I said in the beginning, I'm not really expecting much from this post. But, if you're really into design and want to take a shot, I'd love to see your ideas. Create your own online (at Homestyler or somewhere else) and link to it in the comments, or create it with some other software and upload it somewhere and link to it. Or, if you have a finished basement that you really like and think part of it might work for us, upload a picture or two and link to those. (Or, if you did something and you really regret, let us know about that as well.) And, of course, you can always just leave a text comment with your ideas.

So, can you help out a design-challenged blogger? I'd love to see what ideas you might have.
Posted by Karl Fisch at 1:06 PM