That's about an 88% decline in U.S. jobs at GM in 30 years. Interestingly, it's only a 60% decline in market share, which illustrates the automation/productivity portion of the shift. 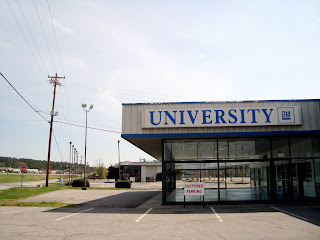 Flickr Photo Credit: two GM dealerships out of business, originally uploaded by marina.
Posted by Karl Fisch at 7:12 AM