Is the Pen Mightier than the Keyboard?

The National School Board Association has a companion blog to their Board Buzz specifically for their Technology and Learning Conference coming up in October in Denver. A recent post pointed to research comparing students’ writing with a pen versus with a keyboard. Board Buzz said:

Virginia Berninger, a University of Washington Professor of Educational Psychology, discovered that children write better and longer essays at a faster pace when using a pen.

When I read the article it referenced, though, it actually stated:

"Children consistently did better writing with a pen when they wrote essays. They wrote more and they wrote faster." said Berninger.

I would first point out that writing “more and faster” is not necessarily the same as writing better, so I think NSBA might want to update their verbiage in that post. (The article did state that the students wrote more complete sentences in that portion of the study which might be considered “better,” but that wasn’t the essay portion.)

The study also left me with more questions than answers (which is not necessarily a bad thing). The study looked at second, fourth and six graders, and they had to complete a variety of tasks on paper using a pen and on a computer using a keyboard. But nowhere in the article (not sure about in the research itself as there’s no link) did it mention what kind of keyboarding skills the kids had or how much experience with computers they had - that seems like a pretty major thing to leave out. If the research actually didn’t take that into account, that seems to be a major oversight in the methodology.

After all, I think we can assume that the students have had plenty of practice writing with paper and pen, but how about on a computer? Did they have keyboarding skills or were they hunting and pecking? With the common wisdom of the moment being we shouldn’t start keyboarding practice until about the fourth grade, that really makes you wonder about the keyboarding ability the students had. Had they received instruction on composing on a computer, or was it just a test-taking tool? Since the article states that ,"We need to learn more about the process of writing with a computer, and even though schools have computers they haven't integrated them in teaching at the early grades,” that seems to indicate they have not received much instruction. Both of those factors – if they were not addressed in the actual research – would seem to suggest the results really don’t tell us very much at all. The students should do better with paper and pen if they don’t have keyboarding skills and haven’t practiced writing on the computer.

Now, having said that, I don’t necessarily disagree that young students should be writing by hand first. While I can’t find the link at the moment, I do recall some research connecting the physical movement of writing with helping students learn their letters and then to read and write. And I do think that around third or fourth grade is probably not a bad time to wait to start keyboarding in earnest based on developmental factors (although I know there are folks that start it earlier and it seems to work out fine). So the line that states, “We need to help children become bilingual writers so they can write by both the pen and the computer. So don’t throw away your pen or your keyboard. We need them both” is not bad advice, at least at the elementary level when students are learning to write.

So the article itself, and the NSBA blog post based on it, appear to be a little misleading. I also think that their definition of writing is too narrow. As the chair of the English Department at Rutgers states, writing/composing in the 21st century is a very different endeavor, and the power of the keyboard is not simply to process words, but also images, audio and video, and the resulting connections to others and their ideas that you can make. I don’t think we can make a broad statement on pen versus keyboard based simply on typing the alphabet, writing isolated sentences, or writing ten-minute essays on a certain prompt. My concern is that someone just skimming the NSBA blog might assume the research – and the NSBA itself – is saying something it really isn’t, and will apply this to older students as well as younger. That, I think, would be a mistake.

My CIO and a bunch of Anne Smith’s ninth graders have left their comments, so I encourage you to visit the blog and leave your thoughts as well. 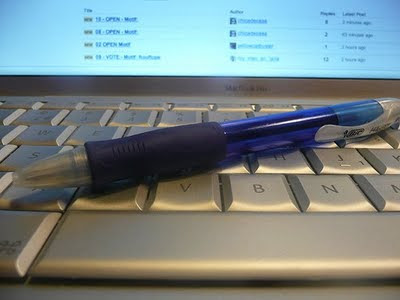