Universities Outsource Astronomy . . . To Us

What do you do when you have a lot of data and not enough personnel and time to analyze it? Well, you outsource it of course. In this case, though, they're outsourcing it to us.

You're sitting on a pile of about a million telescopic photos of the universe, and each one needs to be classified. Bit of a job. So what do you do? Astronomers at the University of Portsmouth, Oxford University, and Johns Hopkins University came up with a solution last week that not only alleviated the burden but also generated an enthusiastic response from the public: They opened up the project to volunteers via the Internet.

The goal of the project is to identify and classify galaxies all over the universe and create a distribution map of galactic types--primarily spiral versus elliptical, but with some variations as well.

In order to accomplish this, the three universities opened up the project on a website called GalaxyZoo. Users log into the site, then are shown images of galaxies (and other cosmic entities). They then enter information about they images they see.

I sent this along to the science teacher at my school who teaches Astronomy - seems like a good project for the students in that class, don't you think? Now, if we could simply get our hands on that 142 megapixel camera they're using . . . 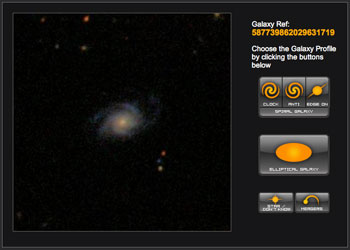